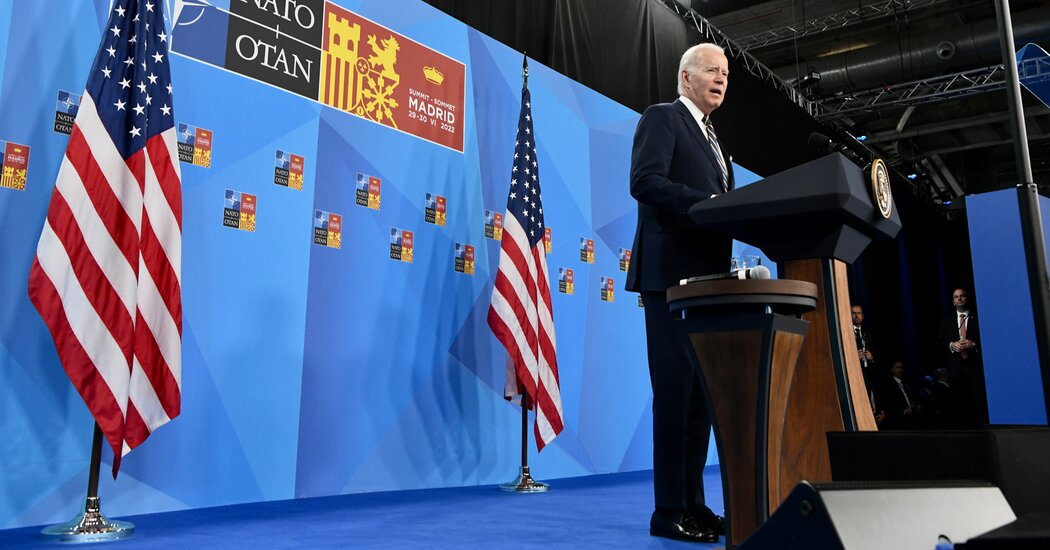 MADRID — President Biden on Thursday condemned what he called the “outrageous behavior” of the Supreme Court in overturning Roe v. Wade and said for the first time that he supported ending the filibuster to protect a woman’s right to an abortion and a broader constitutional right to privacy.

It was a striking assertion from a president who is steeped in the traditions of the Senate and has resisted calls from the liberal wing of the Democratic Party to scrap the longstanding Senate practice of requiring a 60-vote threshold to pass legislation. But in chiding the justices for a decision he called “destabilizing” for the country, the president said it was time to push Congress to act.

It was only the second time Mr. Biden has urged Congress to scrap its rules on the filibuster. In January, he called on lawmakers to make an exception to pass legislation to add voting rights protections.

Speaking at a news conference in Madrid at the end of a weeklong series of meetings with allies in Europe, Mr. Biden lamented the impact of the court’s decision on a woman’s right to have an abortion, calling Roe a “critical, critical piece.” But he also sought to broaden his critique of the ruling, saying it threatened decades of court precedent guaranteeing other fundamental tenets of American life based on the idea of a right to privacy in the Constitution.

With his comments, Mr. Biden forcefully joined the chorus of voices warning that the legality of gay marriage and the availability of legal contraception could be at risk if the court — now dominated by conservative justices — decide to expand their rulings to other areas of the law, as Justice Clarence Thomas suggested in a concurring opinion in the case.

“I really think that it’s a serious, serious problem that the court has thrust upon the United States, not just in terms of a right to choose, but in terms of right to who you can marry — a whole range of issues relating to privacy,” Mr. Biden said.

The ruling has roiled the country and exacerbated partisan divisions, prompting intense anger among Democrats and other abortion rights supporters, while gratifying the Christian right and conservatives who oppose abortion. The decision is poised to reshape American politics just months before voters go to the polls to determine which party controls Congress.

The White House is hoping that embracing a change to the filibuster will resonate with Mr. Biden’s political base, including women, who will be crucial to Democrats maintaining control of Congress in elections this fall.

From Opinion: The End of Roe v. Wade

Commentary by Times Opinion writers and columnists on the Supreme Court’s decision to end ​​the constitutional right to abortion.

But the president and his allies in the Senate have so far failed to rally enough support to make such exceptions to the filibuster. Among those who have expressed staunch opposition are two moderate Democratic senators: Kyrsten Sinema of Arizona and Joe Manchin III of West Virginia.

Both senators condemned the court’s ruling when it was handed down last Friday and said they would support legislation to put Roe v. Wade’s protections into law. But Ms. Sinema has balked at undoing the filibuster threshold to accomplish that. Asked for comment on Mr. Biden’s remarks on Thursday, her office referred to a 2021 opinion article in which Ms. Sinema argued against lifting the filibuster to expand health care or retirement benefits.

Ms. Sinema has also pointedly noted that the filibuster had repeatedly stopped Republicans from advancing legislation that would have undercut abortion rights when the party controlled the Senate.

Mr. Manchin has said in the past that he does not support making an exception to the filibuster for Roe, but hopes that Republicans would vote with Democrats to codify its protections into law. A spokeswoman for Mr. Manchin said Thursday that his position had not changed.

Republican support is unlikely to materialize. Senator Mitch McConnell of Kentucky, the Republican leader, on Thursday lashed out at the president for his comments.

“Attacking a core American institution like the Supreme Court from the world stage is below the dignity of the president,” Mr. McConnell said in a statement. “He’s upset that the court said the people, through their elected representatives, will have a say on abortion policy. That does not destabilize democracy — it affirms it.”

Mr. Biden said he could understand why Americans are frustrated with the direction taken by the court’s conservative majority.

“It is a mistake, in my view for the Supreme Court to do what it did,” Mr. Biden said. “I feel extremely strongly that I’m going to do everything in my power, which I legally can do in terms of executive orders, as well as push the Congress and the public.”

“If the polling data is correct and you think this decision by the court was an outrage or a significant mistake, vote, show up and vote,” Mr. Biden said. “Vote in the off-year and vote, vote, vote. That’s how we’ll change it.”

Mr. Biden has long struggled to navigate the issue of abortion. A practicing Catholic, he said decades ago that the court’s ruling in Roe “went too far.” But in more recent years, he has staunchly defended it.

On abortion, as on other issues, Mr. Biden has come under pressure from progressives to be more aggressive in how he talks about protecting the right to an abortion. But he is a centrist by nature and a pragmatist who has shown a willingness to compromise since taking office last year.

Mr. Biden remains under pressure from some members of his party to do more. On Thursday, after Mr. Biden said he supported suspending the filibuster to protect abortion rights, Sara Tabatabaie, the chief political officer for VoteProChoice, an abortion rights group, criticized the president.

“The filibuster carve-out can only happen if every Democratic Senator acts,” Ms. Tabatabaie said, “and it is guaranteed to fail so long as Joe Manchin and Kyrsten Sinema continue to prioritize the filibuster over reproductive justice. The White House knows that.”

Mr. Biden was asked by a reporter whether he is the right messenger to lead the fight for abortion rights in the wake of the court’s decision, given that many of his supporters think he is being too timid. He appeared to bristle at the question.

“Yeah, I’m the president of the United States of America,” he said. “That makes me the best messenger.”

The president cited his legal experience saying he had written “a number of law review articles” about the Ninth Amendment and the 14th Amendment and why privacy should be recognized as a right guaranteed by the Constitution.

The Roe decision was based in part on the 14th Amendment’s guarantee that people cannot be “deprived of life, liberty or property, without due process of law.” It also relied on the Ninth Amendment’s acknowledgment of rights not specifically enumerated in the Constitution or the Bill of Rights.

“They’ve just wiped it all out. So I’m the only president they got,” he said.

On Monday, Xavier Becerra, the Secretary of Health and Human Services, hosted a round-table discussion with several Democratic governors to talk about how the federal government can help maintain access to abortion. Mr. Biden said Thursday that he would meet with governors after he returns to the United States.

Nancy Northup, the president of the Center for Reproductive Rights, which litigated the recent abortion case, said Mr. Biden’s public declaration of support for suspending the filibuster was “phenomenal.” But she said it is up to Mr. Manchin and other lawmakers to pass legislation.

“Congress has the power to do this,” she said. “The president now supporting filibuster reform is really helpful in helping the public understand just how close this Congress is.”