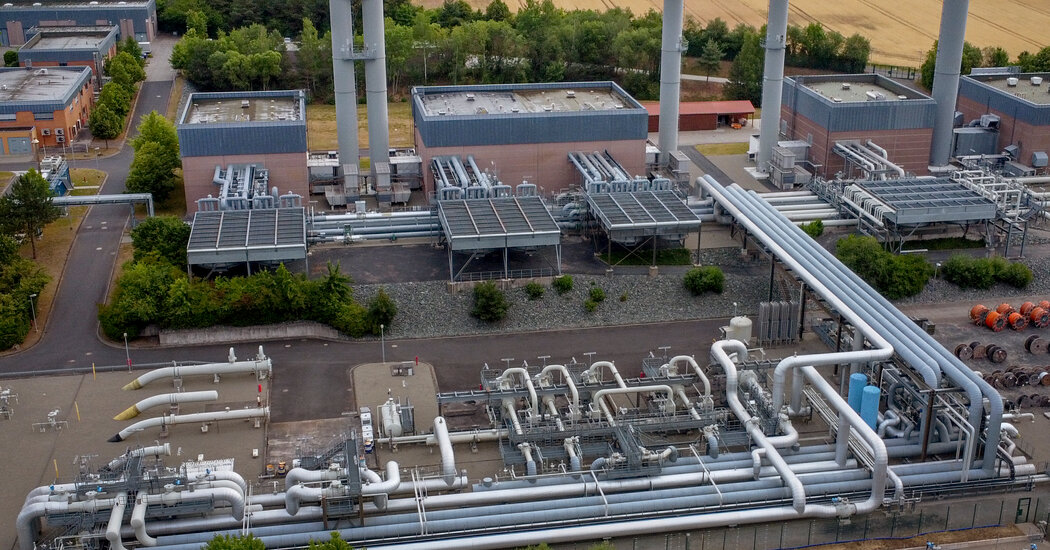 BRUSSELS — Fearing Russia could shut the taps this winter, the European Union agreed to a deal on Tuesday to curb natural gas consumption starting next week, the latest show of resolve and solidarity in its push and shove with the Kremlin over President Vladimir V. Putin’s invasion of Ukraine.

The deal highlighted the continued ability of the European Union to forge agreement, even if blunted by compromise, and signified an important step in managing its dependence on Russian energy and overcoming divisions in the face of Russian threats.

“Today, the E.U. has taken a decisive step to face down the threat of a full gas disruption by Putin,” Ursula von der Leyen, the president of the European Commission, the bloc’s executive arm, said in a statement soon after the agreement was reached.

For now, the cuts, which aim for savings of up to 15 percent by the spring, will be voluntary, but could become binding should an energy supply crunch — or a sudden Russian cut in supplies — trigger an emergency. How that would be achieved was up to each individual state, but countries would have to look for savings immediately, including by rallying citizens to change habits around heating or air-conditioning use at home.

Ms. von der Leyen said that by acting together — and accounting for the energy challenges facing each nation — the European Union had “secured the strong foundations for the indispensable solidarity between member states in the face of Putin’s energy blackmail.”

It was no small feat that, in making the deal, the commission asked countries that are less dependent on Russian gas to equally share the burden of cutting consumption, underscoring the rationale that the bloc’s economy is highly integrated and a blow to one member can harm them all.

The flow of Russian gas, which supplies 40 percent of E.U. consumption, was less than one-third the normal average in June. Gas storage facilities in Europe, normally almost full at this point in the year in preparation for winter, are not sufficiently stocked to deal with such volatility and shortages. European countries mostly use gas for generating electricity for households as well as industry and, especially, domestic heating.

The fuel represents a quarter of the bloc’s energy mix, with some countries relying on it much more than others. Before the invasion, Germany relied on Russia for 55 percent of its gas imports. In the past few months it has been able to reduce that to around 30 percent.

Europe’s Shift Away From Fossil Fuels

The European Union has begun a transition to greener forms of energy. But financial and geopolitical considerations could complicate the efforts.

The agreement came less than 24 hours after Russia’s state-owned gas monopoly, Gazprom, said that it would further reduce the amount of natural gas it sends to Germany, Europe’s biggest consumer of Russian gas, through the Nord Stream 1 pipeline. Limited flows resumed less than a week ago after an annual maintenance shutdown.

Before the Brussels meeting, President Volodymyr Zelensky of Ukraine accused Moscow of waging “an overt gas war” against “a united Europe” and urged leaders not to give in to Russian threats.

Though the agreement did not require unanimity among the 27 E.U. states, diplomats involved in the process said that ultimately only one member did not support the deal — Hungary, which has been a holdout before.

Since Russia’s invasion, the European Union has rallied to adopt sanctions. It has fully banned the import of Russian coal, effective Aug. 1, and will ban most Russian oil imports by the end of this year. But the oil embargo was a bruising measure to adopt, with Hungary, which has maintained warm relations with the Kremlin, managing to exempt itself for the foreseeable future.

The agreement reached on gas cuts on Tuesday traced manifold internal divisions, but breaking from past habits, the member states managed to contain acrimony and come out with a quick and seemingly effective compromise.

The European Commission’s original proposal last week presented a less flexible plan to urgently cut use of the fuel across the bloc. It foresaw fewer exceptions, and put the Commission itself in charge of calling an emergency and triggering mandatory natural gas curbs.

Controversially, the proposal asked even those countries that are less dependent on Russian gas or have already started ambitious energy-saving plans to equally share the burden of cutting consumption, to help those who are more dependent.

The German vulnerability turned the tables on an old European script; in previous financial crises, the Germans pointed the finger at weaker countries, especially in the continent’s south, for being irresponsible. Now southern countries, among them Greece, Spain and Italy, were able to take the moral high ground.

But the complexities of curbing gas use in Europe go far beyond cliché cleavages between north and south. Ultimately, the modus operandi of resolving the disagreements was entirely different from the old E.U. playbook, normally characterized by fruitless, late-night meetings and public disparagement.

Instead, E.U. energy ministers meeting in Brussels on Tuesday morning were out of their talks five hours later, with a compromise that seemed to address individual concerns without diluting the policy goal — to cut gas use and defang Mr. Putin’s energy threats.

“Europe achieved a great, I want to say an astonishing level of unity,” said Robert Habeck, Germany’s economy minister. He added that the agreement showed that Mr. Putin’s strategy of trying to drive up the price of gas, in an effort “to divide Europe and break its solidarity with Ukraine,” would not work.

“Today’s summit and the deal sent a strong, decisive signal to the contrary, which I think will be heard in Moscow,” Mr. Habeck said. “Europe will not be divided.”

The compromise plan will exempt Ireland, Cyprus and Malta, island nations with little flexibility to seek alternative energy sources in the event of shortages, because they are not connected to the continent’s complex system of pipelines. The three countries between them have a population of seven million — the total E.U. population is about 450 million — and represent a tiny fraction of overall gas consumption.

Other exemptions would kick in under specific circumstances to accommodate members in energy distress, or those who’ve done extremely well in their gas savings. The Baltic States —Estonia, Lithuania and Latvia — have electricity grids connected to Russia’s and, if Russia cuts them off, they too will not be asked to curb their gas use.

Countries that have overshot their storage-filling target, such as Poland and Italy, can ask to be compensated by cutting their use less, although such an exemption wouldn’t be automatically granted, a senior official at the European Commission said.

And member states would not be permitted to hoard natural gas for national use in their storage facilities when others are suffering shortages. The E.U. countries agreed to share their gas stocks and bail each other out if acute shortages happened, using those dense, shared pipeline networks.

European officials said that the original Commission plan would prepare the bloc to comfortably survive a very cold winter with no Russian gas imports by cutting about 45 billion cubic meters of gas use. The compromise plan would keep them going without trouble in a normal winter, with little Russian gas, cutting a slightly more modest but still significant 30-40 billion cubic meters.

It was a double victory, said Simone Tagliapietra, an energy policy expert with Bruegel, a Brussels research group: The European Union found a credible path to cut its dependence on Russian gas, and managed to stick together when the Kremlin had sought to divide them.

“From this plan we might get up to 40 billion cubic meters by March and that’s exactly what we need,” he said.

“Putin’s strategy has been clear from the beginning, you don’t need to be a genius to see that Russia wants to use the leverage it has on E.U. countries to try and divide the E.U. to weaken its stance on Ukraine,” he added. “Gazprom is not a company any more, it’s a geopolitical weapon in the hands of the Kremlin.”