For Foreign Fighters in Ukraine, a War Unlike Any They’ve Seen 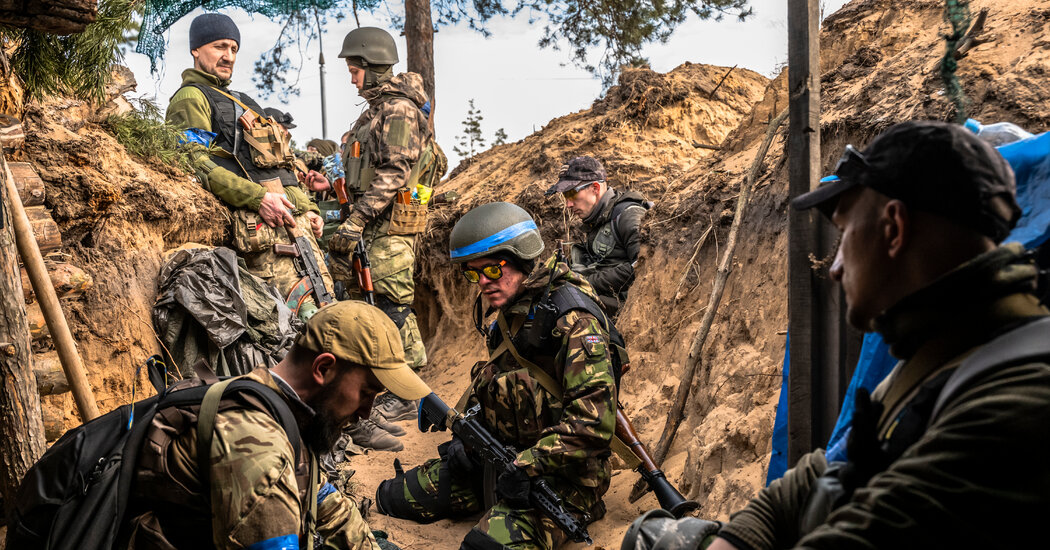 DRUZHKIVKA, Ukraine — Four months after Russia invaded Ukraine, foreign combat veterans who answered the Ukrainian president’s call to fight are grappling with the grueling reality of a war unlike any they have seen.

Many are American and British veterans of the wars in Afghanistan and Iraq, where they could count on calling in airstrikes for protection and other critical support. In Ukraine, the military effort is essentially bare-bones, leaving Ukrainian forces — and their foreign-fighter allies — to face a larger and better armed Russian invasion force without basics, like steady meals, and even some tools of modern warfare that would help them level the field.

“This is way more intense than what I saw in Afghanistan,” said Brian, a former U.S. Army paratrooper, who did not want his last name used for security reasons. “This is combat, combat.”

That reality, volunteer fighters say, has driven away some of the hundreds of men who first arrived in Ukraine to help fight what many felt was a just, and deeply lopsided, war. Of those who remain, some now work directly for the Ukrainian military, which has used them quietly and effectively to plug gaps in frontline abilities, including filling a desperate need for medics.

Some would-be fighters are still wandering the country — their goals vary and include building an online following, getting a first taste of battle or, in some cases, finding others who espouse far-right beliefs, according to fellow fighters. But the most professional foreign soldiers have increasingly earned respect from their Ukrainian comrades, as well as the country’s leaders.

Oleksiy Arestovych, an adviser to President Volodymyr Zelensky of Ukraine, especially applauded those who fought recently in one of the war’s most grueling battles, in Sievierodonetsk, saying that their “motivation, professionalism, their preparedness for urban warfare” played an important role in holding off the Russian troops for so long.

They are “just what we needed,” he said.

The numbers of foreign dead pale in comparison with the losses suffered by the Ukrainians, but the risks that the fighters from abroad face have been reinforced in recent weeks. On June 9, Russia sentenced three captured foreigners to death, and reports have surfaced of at least four American deaths on the battlefield. In the most recent case, the State Department confirmed on June 22 that Stephen Zabielski, 52, an Army veteran, was killed in May after stepping on a land mine.

The professionalism that Mr. Arestovych described emerged from the initial chaos of a flood of volunteers. Some were seasoned combat veterans; others were aspiring fighters arriving with bulging backpacks filled with military gear but no experience on front lines. They came to answer what was essentially an S.O.S. call from Mr. Zelensky in the early days of the war, when many world leaders and analysts assumed that the Russians would quickly rout the outmanned Ukrainians.

Within days, volunteers began flying to Poland and heading to its border with Ukraine. Within weeks, the western Ukrainian city of Lviv, 90 minutes from the border, was brimming with Americans and other foreigners arriving by train and bus trying to find a way to the front.

Because almost no structure was in place to sort out who was fit to fight or to help the new arrivals find positions, some volunteers wandered Lviv until they found someone who could direct them to a recruiting office. Others returned home in frustration.

“It was an attempt to garner some support for a cause that in late February didn’t look so promising,” Kacper Rekawek, a fellow at the Center for Research on Extremism at the University of Oslo, said of Mr. Zelensky’s distress call. “It came out of the presidential circle, and I don’t think all the elements of the bureaucracy — military, civilian, what have you — immediately got the memo.”

Four months into the war, much about the foreign forces remains opaque. Mr. Arestovych estimates that 1,000 have participated in battles. But with no central clearinghouse for volunteers, no one knows for sure. Hundreds or thousands more have come to help with noncombat duties.

President Biden has discouraged Americans from going to Ukraine, a point he reiterated recently when two American veterans went missing and were reported to be in Russian custody.

The most well-known of the foreign fighting groups is the International Legion for the Defense of Ukraine, created by the Ukrainian government in line with Mr. Zelensky’s call.

The Legion does not give numbers of its members, but its spokesman, Damien Magrou, said that of the countries represented in its ranks, the United States and Britain were at the top. All of those accepted by the Legion sign contracts with the Ukrainian Army, serve in units where foreign noncommissioned officers answer to Ukrainian officers and are paid the same salary as Ukrainian military forces, he said.

A video posted recently on social media showed Legion fighters in intense urban combat. The video, which was edited and reported to be shot in Sievierodonetsk, shows a group of soldiers, clearly well trained and well equipped, moving through bombed-out buildings and firing at Russian troops. The Hollywood-style footage was a clear indicator of some of the abilities of the Legion and of those staffing its units: experienced, professional fighters now directly involved in some of war’s most vicious battles.

Much of the International Legion’s carefully managed media efforts have been aimed at increasing foreign public support for Ukraine’s war effort and at making the case that Ukraine needs more advanced weapons.

Mr. Magrou said that after an initial wider acceptance rate, the Legion now accepts only those who have combat experience, who have passed background and psychological checks and who do not express extremist views.

But some of those rejected by the Legion, he said, were accepted by other units of foreigners or found their way to the front lines and formed their own fighting groups.

“Volunteer groups can be anything from 15 guys with three rifles” to the largest and most organized groups, said Mr. Magrou, a French-Norwegian corporate lawyer who was living and working in Ukraine when Russia invaded in February.

Weeding out extremists from the many fighters who want to help Ukraine has proved tricky. Two frontline recruits, who did not want to give their names for security reasons, described meeting in safe houses with American and Scandinavian members of the white supremacist Aryan Brotherhood, including some with prison tattoos, who were trying to make their way on their own to the battle.

Even the Legion may have had troubles. A photograph on its Facebook page of members who died portrayed a French casualty, Wilfried Blériot, wearing a patch from the “Misanthropic Division” — a far-right group with white supremacist views. In another photograph, posted on Telegram by the Misanthropic Division, he wears one of their T-shirts.

The reasons fighters choose to risk their lives for a country that is not their own vary widely.

Brian, the American veteran who fought in Afghanistan, said he came because he had trained Ukrainians years ago to try to hold off Russia-backed separatist forces, and many of the Ukrainian friends he made died in those battles. The son of a Marine, Brian said he was staying — even though his wife has learned she is pregnant — because he realized he was not quite done with the military, and because he believes he is making a difference in an uneven battle.

Instead of the active combat that many would-be recruits envisioned, Brian’s unit — headed by a Danish platoon commander and working with Ukrainian special operations forces — has focused on mundane but vital tasks. Those included helping Ukrainian forces shake some of the Soviet-style doctrines that keep them from sharing information between units and from empowering lower-ranking leaders.

For some other Americans and Britons carrying the baggage of unpopular wars in Iraq and Afghanistan, and even for some who did not fight, the call to arms for what they see as a clear-cut cause proved irresistible.

Matthew Robinson, a Briton who is a former U.S. military contractor in Iraq, said he saw his service in Ukraine as a form of “redemption” for having profited from a war he now believes was unjust.

Mr. Robinson ended up training Ukrainian defense forces across the country, including close to the front lines in the east, the site of some of the most intense battles of the war. There, Ukrainian forces face almost constant artillery attacks.

“Unless you fought in World War II, when have you experienced this?” he asked.