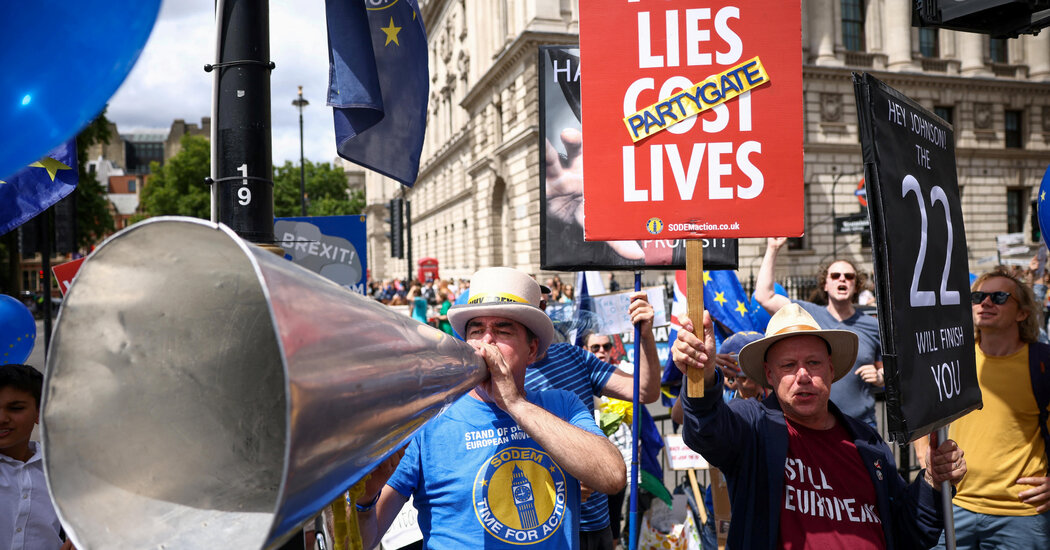 LONDON — As the news of Boris Johnson’s intention to resign as Conservative Party leader started to spread in central London on Thursday, many Britons expressed a sense of relief.

“The sooner he resigns, the better,” said Francis Jackson, 63, a retired police officer from Manchester, England. “He is bringing the government and the United Kingdom into disrepute.”

Mr. Jackson, who described himself as a socialist, said he had supported Mr. Johnson in the last general election in 2019, in what he called a “protest vote” against the former leader of the Labour Party, Jeremy Corbyn. Mr. Jackson said he had hoped the prime minister would get Brexit done and bring self-determination back to Britain.

But when rumors about breaches of coronavirus restrictions at Downing Street started circulating, he said, he changed his mind.

“He was abundantly declared a pathological liar, and I don’t like that,” Mr. Jackson said. “I believe you must lead by example, and the guy has no shame and no integrity whatsoever.”

He said that people could of course make mistakes, but that Mr. Johnson should have simply admitted to them. “I would have had more respect for him,” he said.

An informal survey on Thursday morning of Britons in central London — a city that voted overwhelmingly against Mr. Johnson in the 2019 election — found most respondents pleased with the announcement that Mr. Johnson would be stepping down.

“About time!” said Christopher Meader, 71. “He is a very bad prime minister and a very bad man. It’s been a disaster for this country.”

Mr. Meader, a retired civil servant, said that he had worked under several prime ministers and that Mr. Johnson was “by far the worst.” He said he was surprised that Mr. Johnson had agreed to step down now, after holding on to his job through a long series of scandals.

“He is like a child who does not want to let go of his favorite toy,” he said. “It’s been disgraceful.”

David Levi, a data scientist in London, also said he was surprised to see Mr. Johnson go at this point. “When you put a man with no shame in charge, you expect him to stay on as long as he wants,” Mr. Levi said.

Polly Hatfield, 30, an editor in London, said she was relieved that Mr. Johnson was going. She called his behavior “disturbing” and “embarrassing” and said it undermined the British government. “He has no dignity and no respect.”

In Wakefield, a city in northern England where the Labour Party recently recaptured a parliamentary seat that Conservatives had won as part of Mr. Johnson’s 2019 victory, some voters also welcomed news of the prime minister’s resignation.

They pointed to what they saw as the government’s mishandling of the pandemic, including a sense that officials had imposed one set of rules on the public while following another for themselves.

“I’m glad to see the back of him,” said Anthony Sargeant, 44, who voted for Labour in the parliamentary election last month. “He was becoming a laughingstock. He was bringing the integrity of U.K. politics into disrepute.”

Marie Holroyd, 55, who also voted for Labour in the recent election, said of Mr. Johnson: “Everybody knows now that he’s only interested in himself and his own position. I just don’t think he’s got what it takes to be a leader.”

Ms. Holroyd, a social worker, said she had seen firsthand the effects of social funding cuts during the pandemic, which led her to quit her job two weeks ago from burnout. She said promises that Mr. Johnson had made, including increased funding for the National Health Service, never came to fruition.

“Whoever gets in has got to be better than this current government,” she said.