Priests Once Aligned With Russia Come Under Suspicion in Ukraine 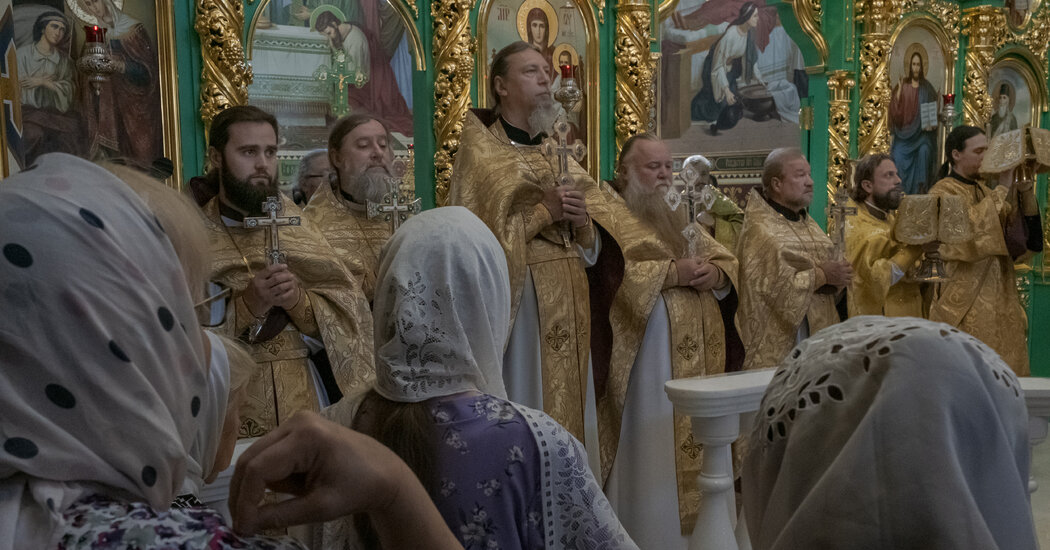 RIVNE, Ukraine — A priest doused in green dye during a Sunday liturgy. Another yanked out of his western Ukrainian church as the police stood by watching. A church attacked by vandals, who filled it with foam, plastered the walls with portraits of Stalin and later set it on fire.

For centuries, the Ukrainian Orthodox Church has been a dominant spiritual force in the country. Now the church is increasingly an object of distrust, largely because its spiritual leadership — at least until May — was in Moscow, rather than Kyiv.

Government officials once courted church leaders. Now they speak openly about suspicions that some priests are collaborating with Moscow and worry that the broader church could be a Trojan horse for pro-Russian views and more.

When it comes to the Ukrainian Orthodox Church, “we are not talking about god, faith, or spiritual development,” said Serhiy Kondrachuk, the head of the Rivne regional council in central Ukraine. “We can only talk about the biggest danger to our national security.”

That the Orthodox church is now a focus of official suspicion is another example of how profoundly the war has upended all aspects of life in Ukraine. Even before the war, the issue of relations with Russia was already a fractious one, between those who supported the church loyal to Moscow and those who supported the newer, similarly named Orthodox Church of Ukraine, which was based in Kyiv.

Now the churches aligned with Kyiv are actively pressuring priests in the other church to change their allegiance. Violent altercations have broken out. The tensions are so deep that in May, the Ukrainian Orthodox Church amended its bylaws to grant itself “full independence and autonomy” from the church in Moscow, the tectonic rupture of a centuries-old relationship.

Even so, official suspicions remain. In one example, at the end of June, the western city of Lviv held a unanimous but symbolic vote to ban the church.

In Ukraine’s Parliament, Mykyta Poturaiev, a lawmaker, convened an official session on the church’s influence. In an interview, he confirmed that the authorities were investigating priests aligned with the Moscow church for providing targets for Russian artillery; informing on Ukrainian activists; and sending data on the positions of Ukrainian troops.

“We understand how carefully they prepared for the invasion of Ukraine,” he said, “and how many [agents] were sent here and recruited.”

One case on the first day of the invasion, Feb. 24, led to the arrest of a priest in a field in a Kyiv suburbs, where a Russian helicopter had been shot down. Police officials believed he was trying to help the downed pilots escape. Another priest from the Kyiv suburb of Borodianka was accused of acting as an informant to Russian soldiers who occupied the now-decimated town. In Rivne, the wife of a local priest was detained on suspicion of collaborating with the Russians.

Information on the cases is closely held by the courts and intelligence services, which have sought to turn some priests under suspicion into informants. No clergymen have been convicted publicly.

Mr. Kondrachuk, the local official in Rivne, displays the case of a Javelin anti-tank missile in his office and has been lobbying to get the Ukrainian Orthodox Church banned in his region. At scholastic and religious events, he said, congregants openly espoused pro-Russian views. He cited a prewar graduation celebration in which dozens of girls sang a song about “waiting for the glory of Holy Russia,” and a Sunday school festival in which children were encouraged to celebrate Imperial Russia’s Romanov dynasty.

“Since Ukraine became independent, Russia has tried to bring its influence and values — cultural, religious, and otherwise — here,” he said.

When Ukraine left the Soviet Union in 1991, the Ukrainian Orthodox Church retained its loyalty to Moscow, while the Orthodox Church of Ukraine was founded, loyal to Kyiv. Today, there are approximately 8,000 parishes loyal to the Kyiv-based church and still roughly 12,000 loyal to the Moscow patriarchate. But since the war started, hundreds of churches have switched to the Kyiv-based church.

Metropolitan Clement, a spokesman for the Ukrainian Orthodox Church, denied giving any assistance to Moscow’s war aims and noted that the church’s leader unexpectedly condemned Russia’s invasion on the day it happened. Yet loyalties remained unclear, since the church remained under the authority of Patriarch Kirill, the 75-year-old leader of the Russian Orthodox Church, a close ally of President Vladimir V. Putin and a prominent supporter of the war.

Mr. Putin’s justifications for the war include conservative religious undertones; he has called Ukraine an “inalienable part” of Russia’s “spiritual space.” At the end of May, the church finally cut ties to Moscow, after hundreds of parishes shifted their allegiances to Kyiv.

“Their motivation is mostly threats,” Metropolitan Clement said of the priests who switched sides. “Like when people come to your house, break windows, paint swastikas. Or like in the Lviv region a priest was doused with brilliant green for ‘being a collaborator’. What is his collaboration? Praying the faith he believes to be true?”

Overall, though, Ukrainian officials said that priests constitute a small percentage of the more than 1,400 cases brought against citizens for collaborating with the Russians. And Mr. Poturaiev, the Ukrainian lawmaker, conceded that the issue of traitors inside the church were individuals rather than a “systemic problem of the whole institution.”

But the mistrust is still very real. An official with the Security Services of Ukraine, who insisted on anonymity because of the sensitivity of the topic, said that about 200 priests from the Ukrainian Orthodox Church in “every region” of the country were under heavy surveillance as potential collaborators. Beyond them, the official said, “almost all” the church’s priests were under some form of surveillance. The information could not be independently confirmed, but Metropolitan Clement acknowledged the pressure. “At least all church bishops are certainly under surveillance,” he said.

The allegations have not stopped pilgrims from coming to the Monastery of the Caves, one of the holiest sites for Orthodox believers from all over the world. After 1991, the Moscow patriarchate retained access to the site, while the Ukrainian government formally owns it as a museum. On a recent Sunday, congregants and soldiers attended Mass.

Yuriy Horodiyenko, a 48-year-old army medic, made a pilgrimage to the ancient heart of the monastery, an underground crypt, with a cast on his right hand from an injury sustained on the battlefield. He said he had been baptized at the Monastery of the Caves and trusted church leadership to decide its future.

“I am praying for Ukraine, for Kyiv, and that there will be no war,” he said.

A soldier from the destroyed city of Mariupol, Serhiy Scherbak, said he had heard of individual collaborators affiliated with the church, but noted, “the church system itself is not guilty.”

But in the village of Hil’cha Druha, half an hour’s drive south of the city of Rivne, a group of locals who had led their congregation through the process of switching their church to the Orthodox Church of Ukraine were far more skeptical.

“We understand that without our Ukrainian church and our army, our state won’t exist,” said Katya Tushkovts, who rallied her congregation to switch churches after the local priest had an icon of the Romanovs, the last Russian royal family, painted in the church several years ago. Once the Russian invasion started, she found a critical mass willing to make the switch.

The priest did not change over with them.

After the group confronted him with a request to switch signed by the majority of the congregation, a supervising priest from the Moscow patriarchy arrived with the local cleric to remove their property from the building.

“The supervising priest got on his knees and cursed our village,” Ms. Tushkovts said. “He said he hoped not a single person here stayed alive. What kind of priest is that?”