U.N. Yields to Russia and Extends Aid Mission to Syria for 6 Months 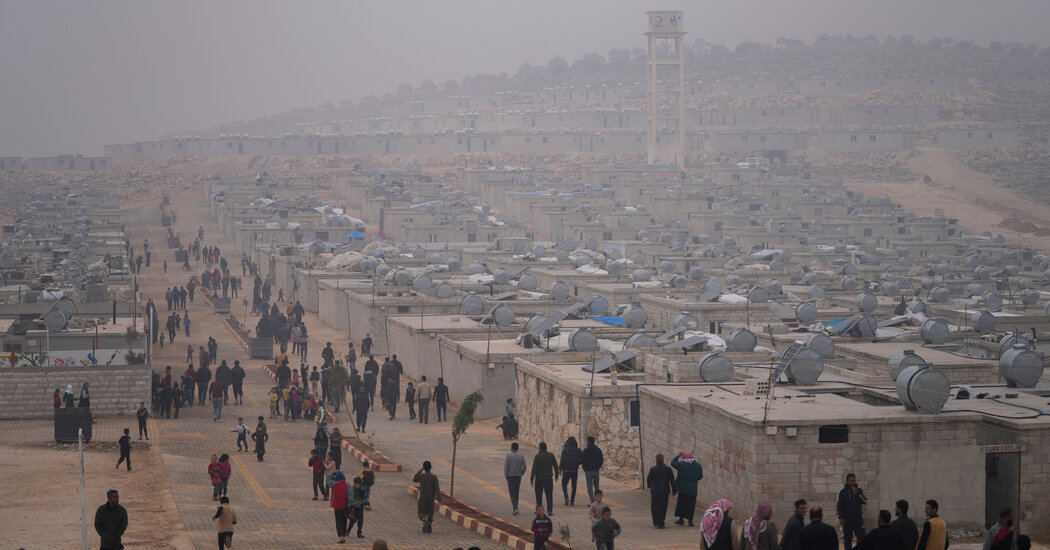 WASHINGTON — World powers agreed on Tuesday to continue a United Nations aid mission to northwest Syria for six more months, bending to a deadline demanded by Russia that will, for now, avoid shutting down lifesaving deliveries for about four million people living amid an 11-year civil war.

Just days earlier, Russia had vetoed a plan at the U.N. Security Council to keep the humanitarian aid corridor, from Bab al-Hawa on the Turkish border into Idlib Province, open for one more year. In response, Western diplomats had then rejected a Russian proposal to instead allow the mission to remain for six months, calling it too short and unacceptable, given that the food, medicine and other supplies would be cut in the middle of winter, when the aid is needed the most.

But with little alternative to help war-weary Syrians — more than one million of whom have been living in tents during the conflict that began in 2011 — the council adopted the six-month mission as officials consider how to assist after it ends.

“What is most important today is that the council, with this resolution, keeps the cross-border mechanism open and operating — that humanitarian assistance continues to reach those in need,” said Ireland’s ambassador to the United Nations, Geraldine Byrne Nason.

Ireland and Norway drafted a compromise proposal that hews to Russia’s six-month deadline but also allows the possibility of extending the aid mission for another six months with a new vote after it expires in January.

The vote on Tuesday also showed the limits of Western resolve to contain Russian power around the world, as the United States and other nations have sought, since Moscow invaded Ukraine in February. Twelve members of the council approved the new measure, and none opposed it, although the United States, Britain and France abstained from voting.

“The world is not limited by the Western countries,” said Russia’s deputy U.N. ambassador, Dmitry Polyanskiy, “and it’s time for you to get used to respecting the interests of other states — first and foremost, just such states who are impacted directly by the Security Council decisions.”

Russia is a main benefactor to President Bashar al-Assad of Syria in the war, and used its veto power at the U.N. Security Council to help shut down three other humanitarian corridors into Syria in 2020. Moscow has long maintained that the U.N. mission violates Syria’s sovereignty, and that it should be up to Mr. al-Assad to decide how, and where, international aid is delivered.

China’s deputy ambassador, Dai Bing, on Tuesday echoed Moscow’s demands that “humanitarian assistance to Syria should respect Syria’s sovereignty and the ownership of the Syrian government.”

U.N. officials have described the Bab al-Hawa route as the gateway for the world’s largest humanitarian aid operation, one that has delivered more than 56,000 truckloads of lifesaving supplies to Idlib Province in northwestern Syria since 2014. Aid groups estimate that 70 percent of Syria’s population does not have reliable food supplies.

Russian diplomats also have warned that aid delivered to Idlib — the last large rebel enclave in Syria and an area that has also become a haven for extremists linked to Al Qaeda — was vulnerable to being taken by terrorist groups.

Russia agreed last year to keep Bab al-Hawa open after intense negotiations with the United States, with the understanding that the U.N. mission’s mandate would expire this past Sunday. But in recent months, Russia had signaled it would refuse to continue the annual process of yearlong extensions.

“We’re going to continue to monitor progress and implementing the resolution we adopted today so as to decide on the ultimate fate,” Mr. Polyanskiy said.

Richard M. Mills, the deputy U.N. envoy, said Moscow’s support for Mr. al-Assad was all the more desperate for Syrians, given food shortages caused by limited wheat and oil exports from Russia and Ukraine.

“Russia knows that some of the recent dire needs in Syria are a direct result of Russia’s invasion of Ukraine, and the shocks that brutal invasion has caused to food systems in Syria and around the world,” Mr. Mills said. “And the simple truth is, Russia does not care.”