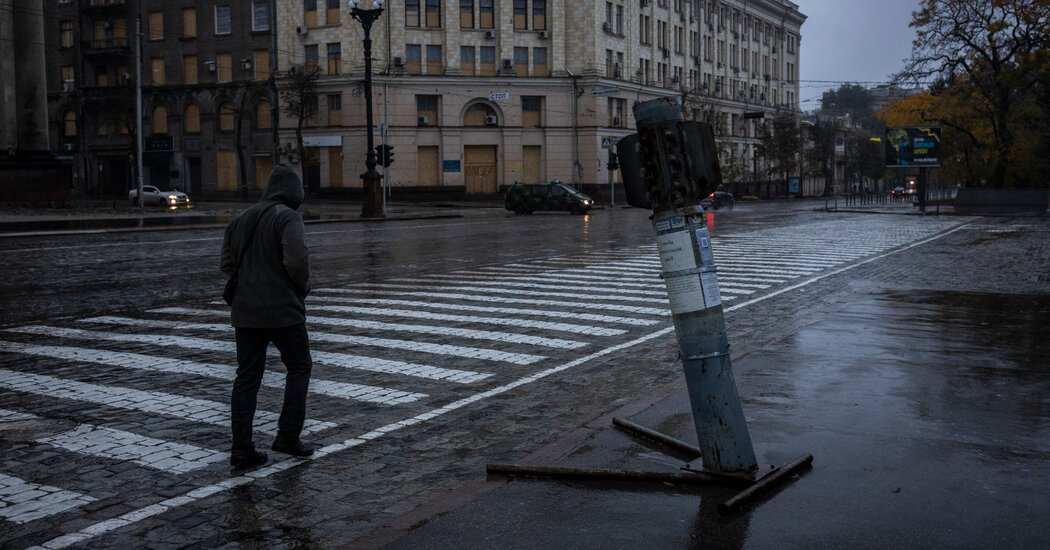 The Russian missile and drone attacks that killed at least 19 people across Ukraine on Monday were traumatic and wide-ranging, but they were not as deadly as they could have been, in the context of a war that has included widespread civilian killing.

That has renewed questions over the quality of Russia’s weapons and about the capacity of its forces to carry out President Vladimir V. Putin’s military designs.

Ian Storey, a senior fellow at the ISEAS-Yusof Ishak Institute in Singapore, said it could be a sign that Russia’s guided missiles are not very effective, or that it is running short of precision munitions. Most of the missiles targeted energy and other civilian services, in what Mr. Putin said was retaliation for a blast on Russia’s bridge to occupied Crimea.

“Perhaps it was Putin’s way of sending a warning shot across Ukraine’s bow: If you attack our infrastructure, we will ramp up attacks on your cities,” Mr. Storey said. But he and other experts acknowledged that much about Russia’s weapons arsenal remains unclear.

Here is some of what we know:

Russia may be running low on sophisticated missiles.

Many of Russia’s attacks — increasingly aimed at civilian targets — have been long-range strikes that used outdated, unguided and imprecise missiles, including some from the Soviet era. Ukrainian, Western and Russian analysts have said that the attacks appear to suggest that Russia is running low on its most sophisticated weapons.

Western intelligence officials say that Russia used up many of its most accurate weapons, including cruise missiles and certain ballistic missiles, in the early days of the invasion. Russia’s arms industry has long relied heavily on imported electronic parts. As a result, analysts say, sanctions and export controls appear to have limited the Kremlin’s ability to restock its supplies, leaving it to rely more on unguided munitions.

Experts said that by using dozens of precision missiles against civilian targets, Russia would have fewer to use on the battlefield as it faces Ukrainian counteroffensives in the east and south.

“Given how they are strapped in terms of resources and military materiel, it is unlikely that Russia can maintain the combat tempo it exhibited on Monday,” said Ridzwan Rahmat, the principal defense analyst at Janes, based in Singapore.

It is increasingly turning to Iran and North Korea for supplies.

Russia has been buying military drones from Iran and, according to intelligence sources, artillery shells and rockets from North Korea. Analysts see both developments as a further sign that sanctions have hampered Russia’s military supply lines.

Iran has confirmed that a drone deal with Russia was part of a military agreement that predated the war, and Iranian-made drones have been spotted in the skies above Ukraine more frequently. Ukraine’s military said that of the 24 drones Russia used in the attacks on Monday, more than half were Iranian.

Ukrainian soldiers have said that the Iranian drones — which carry a payload of about 80 pounds and are self-destructing — are effective battlefield weapons.

There is no hard evidence of Russia having purchased North Korean weapons, Mr. Storey said. But if true, he added, “it’s a sign of desperation.”

Russia’s nuclear weapons remain a threat, though it’s unclear whether the Kremlin will use them.

Russia has a large supply of tactical nuclear weapons — probably about 2,000, far more than the roughly 100 that NATO has positioned around Europe. In recent weeks, Mr. Putin has raised the prospect of using nuclear weapons to hold onto his tenuous territorial gains in Ukraine.

Whether he actually would use them despite the huge risks — both to Ukraine and to Russia and the wider region — is another story.

Senior U.S. officials say they have not seen any evidence in recent days of Russia’s moving its nuclear assets. And on Monday, Dmitri S. Peskov, the Kremlin’s spokesman, dismissed speculation that Russia would use nuclear weapons in response to the Crimea attack as “completely incorrect.”

Russian missiles have been vulnerable to Ukrainian air defenses.

The relatively low casualty toll on Monday, Mr. Storey said, was partly a result of Ukraine’s ability to shoot down some Russian missiles using air defenses that have remained largely intact throughout the war.

As of Tuesday, Ukraine’s Defense Ministry said that its forces had shot down about 300 Russian cruise missiles since February. It was not possible to confirm that tally. The total number of Russian missiles fired during the war is believed to be in the thousands.